TOP TOWER - project of the highest building in the Czech Republic

The development company Trigema is preparing a project of a multifunctional high-rise building TOP TOWER near the metro station Nové Butovice. The project was designed by sculptor David Černý and architect Tomáš Císař from the studio Black n´ Arch. According to first estimates, investment costs will amount to 2 billion crowns.

In Prague 13, TOP TOWER will build on the new almost 1 kilometer local pedestrian zone, which runs from the Nové Butovice metro station through the central Sluneční náměstí to the Hůrka metro station. At the same time, it will be almost in the vicinity of the already realized project of the Cyberdog Technology and Information Center, David Černý Trifot's sculpture or the SMART Trigemy residential complex, which includes a gallery focused on contemporary modern photography of the Czech Photo Center.

The building, which is 135 meters high, will offer a public view point at the highest point of the building , where visitors can get there by a ski lift. Almost the entire perimeter of Prague will be visible from the lookout point, starting from the Prague Castle, starting with the National Theater, Vyšehrad and Zbraslav. The building itself, anchored in the height of 125 m, will be intended for rental housing, on the lower floors there will be offices and premises for a multifunctional cultural center connected to a publicly accessible roof garden. On the ground floor and second floor there will be mainly shops and service shops. In the underground there will be capacity parking spaces, which will be shared for the general public with the aim of using these spaces in the range of 24/7. 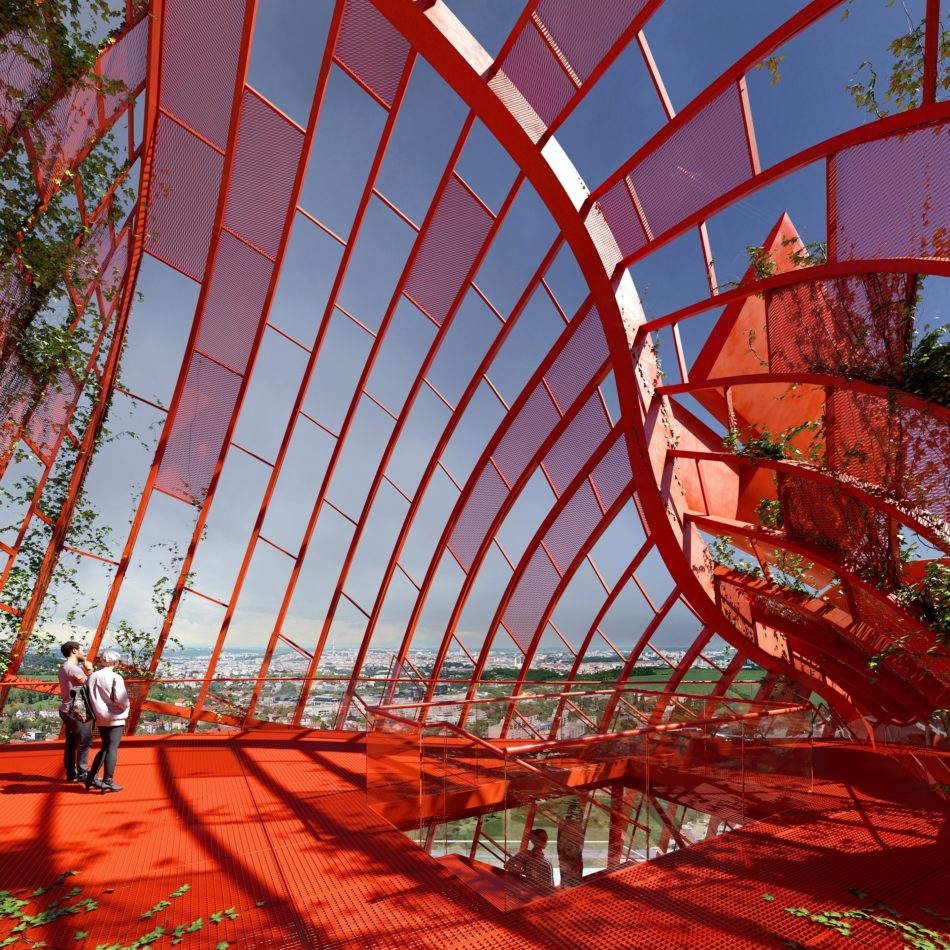 The investor, the developer Trigema, also counts on the certification of the TOP TOWER building with the LEED Gold certificate. It will be an energy-efficient building. As the investor's height study demonstrates, the project under preparation will be outside the protected zone of the urban conservation area and outside the area prohibiting high-rise buildings. At the same time, it is located from the Prague viewpoint so that it will not be visible from the vast majority of places in the center of the metropolis and thus the historical panorama of the city will not be disturbed.

The TOP TOWER project also includes the revitalization of the public pedestrian zone between the two entrances and exits of the Nové Butovice metro station. This zone will be under the baton of the investor connected to the existing solution Korza in Nové Butovice, in which Trigema participated substantially. At the same time, the investor initiated the preparation of a new parking house at the intersection of Petržílkova and Bucharova streets with a capacity of 380 places. It should stand within 200 meters of the project and replace the existing capacity of 60 parking spaces.

“We have been preparing the TOP TOWER project for more than two years and the final version was preceded by eight other alternative solutions. During this time, we have been collecting and still collecting suggestions from experts, affected state and local authorities and, of course, the local public, whose representatives have already taken part in a number of participatory meetings, ” says Marcel Soural, Chairman of the Board of Trigema as

Trigema assumes that the construction of TOP TOWER will begin in 2021 and will take less than three years. Investment costs should reach two billion crowns.

CA IMMO rented another 1,400 m2 in the Missouri Park office building in Karlin

Traditional offices will replace the smart ones, they work anytime and anywhere