The total volume of transactions in the commercial real estate sector in the Czech Republic should reach 1.2 billion euros this year. This is a 63% decrease compared to last year, which was above average successful. If we also take into account the complications that the coronavirus pandemic has brought to the economy, the result is relatively satisfactory and testifies to the continuing appetite of investors. In addition, we can expect a further increase to almost double this year's volume next year. It is also positive that real estate prices still remain stable.

This year's € 1.2 billion in transaction volume corresponds to 2013, followed by strong growth. First to two billion and three times over three billion euros in the last four years. It was 2019 that was one of the three most successful in the last decade, and this year's decline is even more pronounced - but not dramatic.

Michal Soták, partner and head of the investment team in the Czech Republic, Cushman & Wakefield: “Activity in the transaction market has definitely not stopped despite the coronavirus crisis. Even during the pandemic outbreaks, a number of significant transactions took place across all segments of the real estate sector. At the same time, we have not seen any significant price reductions. "

Graph 1: Investment activity in the Czech Republic in 2010–2020 (expected result), in millions of EUR

Transactions in the Czech Republic were dominated by sales of office buildings, which accounted for 46% of the total volume. Another almost a third of transactions took place in the retail segment - despite the complicated situation caused by the pandemic, which hit retail very hard, several major shopping centers were sold.

Michal Soták, partner and head of the investment team in the Czech Republic, Cushman & Wakefield: “During this year's two closures, the shopping centers underwent a demanding endurance test and proved that they are durable and capable of rapid recovery in the long run. For investors, they continue to represent lasting value and a subject of interest, as evidenced, for example, by this year's sale of the Čestlice and Central Kladno shopping centers, in which we participated. "

As for the origin of capital, buyers from the Czech Republic predominated - they carried out almost half of the volume of transactions and bought mainly offices, but also shopping and logistics parks. This was followed by investors from Italy (15%), Singapore (8%) and France (5%).

Activity will double next year

Next year, we expect investment activity in the Czech Republic to increase again, although the volume is unlikely to reach the record numbers of the last four years.

Michal Soták, partner and head of the investment team in the Czech Republic, Cushman & Wakefield: “A number of transactions are already underway, which should be concluded next year. The total volume of transactions could be around two billion euros, roughly double this year's result. " 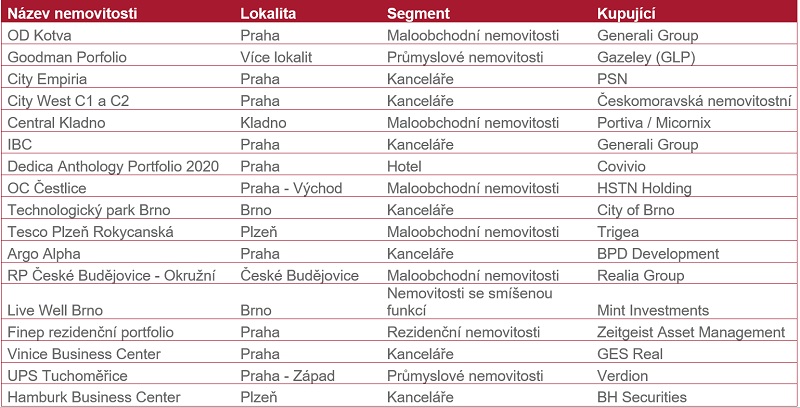 Overview of significant transactions of 2020 in the Czech Republic