On one of the most lucrative plots in the Czech Republic, right next to Prague's Masaryk Railway Station, the cranes of the Penta Investments investment group are already tirelessly delivering material and the local construction site is living its own life. In front of passers-by, the skeleton of one of the most discussed buildings of decades is slowly moving towards the sky.

The group of billionaires Marek Dospiva already has their project Masaryk is simply building in full force and rightly attracts almost all the attention.

"Construction is going smoothly. Among the interesting things, we can mention the turn of October and November, when builders will have to consult with a skeleton of rotating piazzas between buildings and in March next year we will reach the highest point of construction, "summarizes Pavel Streblov, Penta Real Estate's director for commercial construction.

However, the whole and much larger area around the historic railway station and neighboring Florence has to change. The place, which until now was rather one big traffic junction, is to change beyond recognition.

And Penta isn't the only one who's kicked the ground here. It is also busy on the other side of the main road, a large traffic artery that crosses Prague, where workers and machines work on the ČSAD site.

But let's go back to Penta and her projects for a while. The group wants to complete two characteristic buildings right next to Masaryk Railway Station, designed by the studio of the late architect Zaha Hadid and whose construction is in full swing, in mid-2023. More than 22,000 square meters of commercial space are to be created.

Only this first stage of the project directly at Masaryk railway station along Na Florenci Street means an investment of about 3.5 billion crowns. The whole project, the final form of which is now competing, will cost about ten billion. It is already certain, however, that the next stages of construction will be significantly different from the original design of the renowned British architect of Iraqi origin.

The construction of a hotel on the opposite side of Masaryk railway station at the intersection of Hybernská and Opletalova streets is also being prepared. Penta wants to start building the building at the turn of the year according to the design of the Czech studio Schindler Seko. But it depends on how quickly Archaia completes the on-site archaeological survey. According to Streblov, the investment in the construction of the hotel will exceed 1.1 billion crowns.

However, as we have already mentioned, at the other end of a large area, which is to undergo a gradual but fundamental transformation, nothing is expected and built. Directly opposite the back of the Museum of the Capital City of Prague, ČSAD Praha holding is building the Bastion Florenc office project for 400 million crowns.

"We are currently working on the concreting of the rough construction, we anticipate the completion of the construction at the turn of Q1 and Q2 2022 and the approval by the end of Q2 2022," summarizes Jan Benda, Director of Development at ČSAD Praha holding. Commercial spaces are planned on the first and second floors, and offices on the third to sixth floors. In total, there should be about 4,300 square meters of offices in the building. 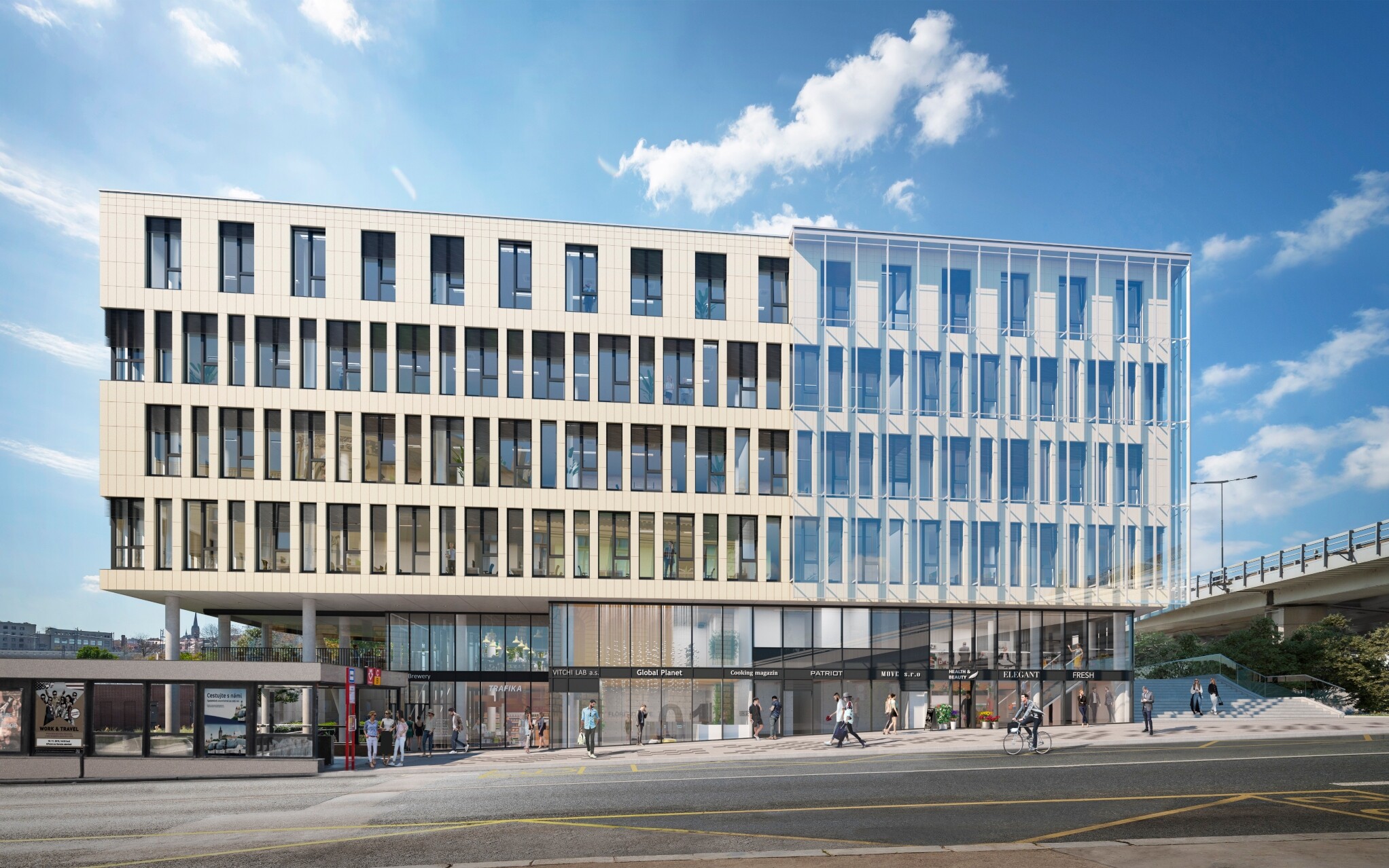 The story of this plot is also partly connected with Penta, but in this case it had a bad ending for the investment group. The building will stand on land on which Dospiv's company was fond, but unsuccessfully.

In the first ambitious visualization studies presented by Zaha Hadid in 2016, the Penta virtual buildings even stood on the lands of ČSAD Prague. So the company was sure that it intended to protect them. However, this then caused resentment among ČSAD, which confirmed that it would continue to prepare its own project and would not sell the land.

"Of course, their construction affects the urban solution of the whole locality. In any case, our relations with ČSAD Prague are correct, this is also evident from the fact that we are with them and the city offering an urban competition for the development of Masaryčky brownfields on the other side of the main road, ”says Streblov.

Even according to the head of development of ČSAD Bendy, the construction company Bastion Florenc in key parameters, such as height, level or permeability of the territory, actually coordinates with the future development on the lands of Masaryk Station Development, ie Penta and Czech Railways. Penta also confirms that he must reckon with the creation of a new square and other public space in Florence.

"The permeability of the territory, as proposed in its Zaha Hadid study, has been maintained, which we consider to be considerable. We reckon with the fact that ČSAD Prague has decided to use the land. More precisely, it is part of the conditions for urban competition, "adds Streblov.

It is only from the international urban planning competition, which Prague initially announced this year together with the landowners ČSAD Praha holding and Masaryk Station Development (a joint venture of Penta and Czech Railways), that it will be clear what the surroundings of Florence will look like in comparison.

The competition was the result of negotiations between the cities and investors on how the planned development should continue from the highway to Florence. The capital did not like the proposal by Zaha Hadid for several reasons, and Penta finally decided to rework a significant part of the project.

The agreement also applies, for example, to the filling of buildings, where Penta has committed itself to provide at least 40% of all space created on site.

The jury selected a total of five studios for the finals of the competition, including the world-famous Danish architectural studio BIG Bjarke Ingels or the Czech studios A69 and UNIT architects. The teams are also to integrate already approved projects in the area into the urban design. It should be clear about the winner this autumn.

The Masaryčka construction has kicked off