The AFI City office building 1 on the city brownfield in Prague 9 near the Kolbenova metro station is full of interesting architectural and design elements. One of them is the artistically crafted gear motif, which occupies the entire main wall of the reception hall, and is the first thing that welcomes visitors. The work by Czech artist Ivan Komárek is a reminder of the rich industrial past of Vysočany, which was the pride of Czech industry at the turn of the 19th and 20th centuries: the most important companies at the time included the Czech-Moravian Machine Factory, Kolben's Electrical Factory and a plant of the engineering company Breitfeld-Daněk, later connected with the world-famous ČKD, but also the carmaker Praga or the Avia Aero aircraft factory.

"The lobby is glazed on all sides and full of daylight, so the distinctive artifact decorating the entrance hall to a height of two floors is also visible from the outside. The walls are lined with white tinted glass and, together with the white grille of the ceiling, contrast with the dark black ceramic tiles and gears. The reception desk is located on the side of the lobby so that it allows the work of art to stand out and at the same time leaves visitors enough space to sit between the pillars made of exposed concrete," comments Kateřina Holická, asset manager of the developer AFI Europe.

The elegant and energy-efficient office tower with 17,300 m2 of modern offices, which complements the space for restaurants, storages and underground car parks with a capacity of more than 300 spaces, was approved in September this year. A total of 75 meters high building has a roof terrace, which is accessible to all tenants and offers a wide view of the surroundings, including Prague Castle. The building is part of the extensive AFI City complex, which is being built on a 15-hectare area and together numbers 150,000 m2 of office, retail and accommodation space. There is also an extensive park with lots of greenery, landscaped sidewalks, a bike path and seating areas. 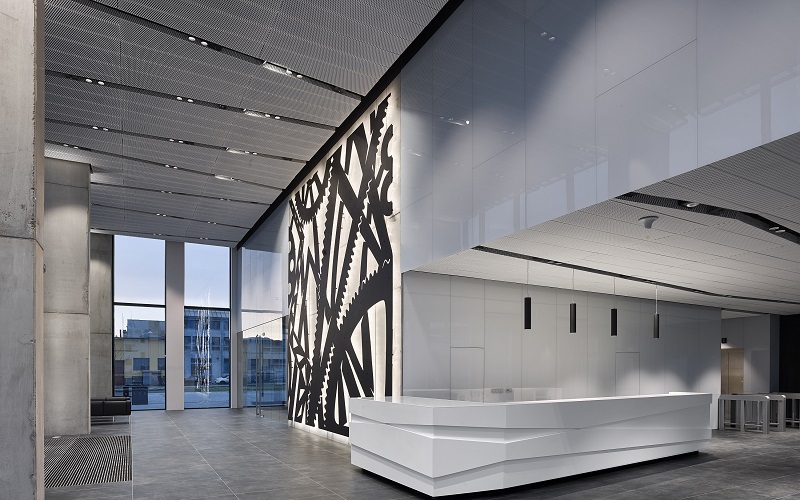 AFI EUROPE Czech Republic is a leading investor and developer in the field of commercial and residential real estate. The company has been operating in the Czech Republic since 1997, where it has completed a number of successful projects: the Palác Flora and AFI Palác Pardubice shopping centers, the Korunní Dvůr, Tulipa Rokytka, Tulipa Modřanská rokle and Tulipa City residential complexes and the D8 European Park logistics park.

In the field of office real estate, it has so far implemented three phases of the Classic 7 Business Park administrative center, AFI Karlín, AFI Vokovice and AFI City 1.

The seventh year of the Open House Prague 2021 festival attracted more than 53,000 people to normally inaccessible buildings and to attend accompanying programs

AFI Europe has completed the acquisition of Avenir Business Park in Prague for EUR 66.5 million

Safely to the offices: AFI Europe is the first in the country to introduce a unique system that eliminates airborne viruses with 99.8% efficiency against SARS-COV-2