Skanska has recently completed the Praga Studios office building in Pernerova Street in Prague's Karlin and the first tenants are moving into the complex. The Karlín branch of coworking and flexible offices Scott & Weber has already started its operation in Praga Studios, and today, for the first time, the Spojka Karlín restaurant will open, offering vegan, vegetarian and meat dishes. Grand Opening Praga Studios is preparing for Thursday, August 29, 2019.

“The Praga Studios, which we built next to our headquarters in Prague's Karlín, are our second project in this district. I believe Edwards Lifesciences and Scott & Weber employees will appreciate the cutting-edge working environment we have prepared for them. It includes technological innovations Connected by Skanska, pleasant relaxation areas on the terraces, and a range of environmental features including green walls and own bee breeding on the roof of the building. As part of the preparation and implementation of our project, we have made everything possible for Praga Studios to meet the demanding requirements of international LEED environmental certification and WELL indoor environment, ” says Alexandra Tomášková, Director of Skanska Property Czech Republic .

Companies based in Praga Studios

The building's largest tenant is Edwards Lifesciences, which has leased 5,300 square meters, ie nearly half of the building. Scott & Weber, a provider of fully equipped offices and coworking facilities, also operates in Praga Studios.

On the ground floor of Praga Studios on an area of ​​600 m2, there will be available modern event spaces of Spojka Events in an industrial style with a capacity of more than 200 people. Thanks to its variable layout, it will be an ideal place for conferences, workshops, corporate trainings or parties. Catering will be provided by Etnosvět sro, which opens its new restaurant called Spojka Karlin. 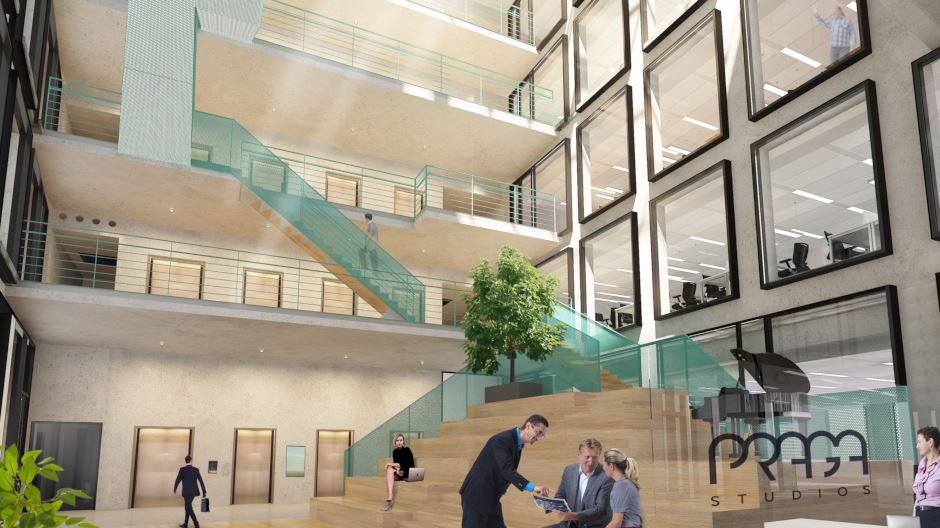 “After three years of successful operation of the vegetarian and vegan restaurant Etnosvět in Prague's Vinohrady, we are opening a new restaurant in Karlín. We associate all those who want to eat well at one table. Without prejudice and regardless of whether it is a vegan, a vegetarian, or a lover of meat, ” says the company executive, Andrei Zaitsev , adding: “ We are thinking about what we eat in the Alliance. We think about our health, so we want food on the plate to make sense. Come and see for yourself that this is different. ”

Praga Studios motto is a combination of business and art. The new building following the industrial tradition of Prague's Karlín has in its center an atrium suitable for artistic performances (concerts, theater performances and exhibitions) intended for both tenants and residents of this district. At the ceremonial opening of the building on 29 August 2019, an orange piano will sound out in the atrium.

For tenants of Praga Studios, Skanska has developed the Connected by Skanska operating system, which allows access to the building via a mobile phone, a smart parking system including navigation to the assigned location, and also brings together all the services in the building and its surroundings.

The jubilee 5th year of the prestigious Office of the Year competition starts the registration of applications. The gala evening will take place in the summer in the open air

Wolt and the Kantar agency are moving to the Bubenská 1 Palace in Holešovice, which belongs to CPI Property Group